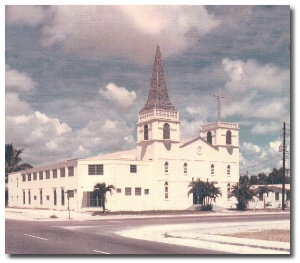 The Church that we now know as New Mount Olive Baptist Church had its most humble beginning November 25, 1918.

In 1923, under the leadership of Reverend H.P. Bragdon, the name of the church was changed to New Mount Olive Baptist Church. Then they decided to build a new Church. Reverend Bragdon and Sister Mary Liza Williams, one of our first members, selected a suitable site on the corner of Fourth Street and Ninth Avenue. In 1925, a small wooden structure was built.

The membership increased rapidly for the next four years, and their faith and perseverance were quite evident as the membership rebuilt churches that were destroyed by the 1926 and 1928 hurricanes. In 1929, the permanent building was completed and the congregation moved in early in September. When Reverend Bragdon ended his pastorate in 1930, there was a completed church building and a membership of more than 500.

Reverend O.W. Wells was called in 1937, and another tremendous growth in membership, size and prestige was recorded. Under his pastorate, a new and bigger church was built.

The Missionary Society, organized July 27, 1939, with Sister Rosa Lewis as president, grew from its original twelve into a group of eleven circles boasting more than 112 members. The church structure was completed. Counted among the many physical improvements was the completion of the remodeling and furnishing of the church kitchen and dining room in February, 1960. By August 31, 1960, the membership had increased to approximately 1,700. 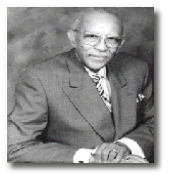 In March of 1962, the Reverend G.E. Weaver was called to assume the responsibility of leadership at Mount Olive. Under his administration, the Church grew spiritually, numerically and structurally. The old church was improved by the addition of a new wing with eighteen classrooms and seating space in the Sanctuary for an additional 200 people.

In February of 1979, 17 years after his call, Reverend Weaver led the Congregation across the street to a 1.5 million dollar structure.

In August of 1981, the Lord moved Reverend Weaver, with the Church’s approval, to invite Dr. Mack King Carter to become Co-Pastor. Dr. Carter, at the time of his invitation, was Pastor of the Green Castle Baptist Church of Prospect, Kentucky. Dr. Carter served faithfully with Reverend Weaver until Reverend Weaver retired in November, 1982. Upon his retirement, Reverend Weaver became Pastor-Emeritus, and Dr. Carter was unanimously called to succeed him.

Under Dr. Carter’s leadership the membership grew to more than 10,000. He established a television ministry that was broadcast nationally and internationally. He also created the Mount Olive Development Corporation (MODCO) which is a faith-based organization whose mission is to revitalize low and moderate income communities by providing strategic programs that promote economic development, create jobs and focus on strengthening families through Public Service, Affordable Housing, and Entrepreneurial Ventures.

Dr. Carter is recognized as one of the country’s greatest Theologians. He published four books and lectured extensively throughout his career as a spiritual leader. However, after 27 years of pastoral leadership, on September 27, 2009, Dr. Carter preached his final sermon as Senior Pastor of the New Mount Olive Baptist Church and entered into retirement from pastoral ministry. On Friday, October 2, 2009, the church, community and friends honored Dr. Carter at a retirement banquet, “A Page for History, remembering 27 years of Delicious Pastoring, Teaching and Leading.” Dr. Carter was named Pastor Emeritus prior to his retirement. 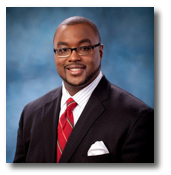 For the first time in the church’s history, a pastoral search committee was selected to search for the next pastor of the New Mount Olive Baptist Church. In November of 2009, Reverend Marcus D. Davidson was elected by the congregation to become the next Senior Pastor of the New Mount Olive Baptist Church. Since history is still being recorded, let us labor together with God in order that our Church will be a Colony of Heaven. As we take inventory of the past and the present, there is no reason to doubt the future, for Jesus Christ is LORD.